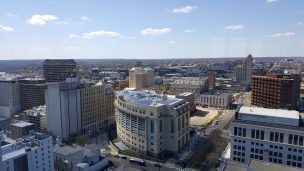 Front and center: The federal courthouse. My job is in this photo, but my apartment is not. 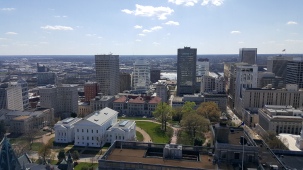 The back of the Capitol and the financial district. My apartment building is in this photo. 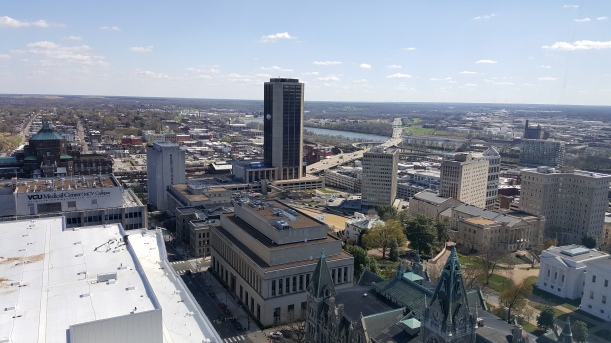 The ugly tall building is the Department of Education. It was supposed to have a twin.

Despite living in Richmond proper for a collective four years, I hadn’t entered City Hall until Monday. I had heard that the top floor was an observation deck, so I decided to go to it while I was there.

I intended to take more/better photos (better is a relative term, because this is a cellphone camera, after all), but it was a cold, windy day and being nearly 20 stories up in a partially open-air structure made it worse.

I only took photos from the southeast/southwest sides of the building because there really aren’t any other tall buildings in the metro area. As you can see in the one featuring the hideous James Monroe tower, after the East End (which includes my old neighborhood of Chimborazo), there’s nothing but flat land after the landfills in Henrico. There are some other interesting structures on the other sides, but that’s a task for a warmer day.

One building of note is the Verizon building, 703 E. Grace St. Virginia’s original area code, 703, was chosen because of that address.

I can’t remember the last time I was this many stories up in a building, which is sad. It certainly makes for an interesting perspective. I need to return to the top of 900 E. Broad St. one day soon.