So, there was a coastal storm on the night of the Jan. 3. It wasn’t supposed to go very far inland. The inland roads weren’t fully prepared.

I was coasting along, fully expecting to see things transition into snow in about 20 miles. I had already slowed down because there was schmutz on my windshield from a salt/sand truck I had passed way earlier. I was debating hitting the wiper cleaner, pulling over and getting the towel out of my trunk if the little squirt of wiper fluid didn’t help enough.

My windshield effectively turned to mud. I tapped the brakes.

That was snow on Interstate 64 at the Shannon Hill exit, not salt.

Nicole immediately turned 90 degrees. I did the turn with the direction of the car thing, but my car slid into a ditch. We went down and struck the other side of the ditch with the front left corner. Nicole then slid backwards a few feet and banged up the back left corner.

Seriously, the rest of the car looks perfect.

I didn’t get injured, and the airbags did not go off. There was no damage to the doors or windows or trunk or even the hood. But due to the age, mileage and the angle of impact, Nicole was totaled.

I was near a former coworker’s apartment, and he was on Interstate 64 at the time, so I wasn’t stranded for long. There was only one state trooper working on that stretch of highway, and towing companies were overwhelmed because, as Trooper K.L. Bailey — who did not give me a ticket — put it, “No one expected it here.”

I had a rental Impala for a few days, and was poised to get one from my nephew when something told me to get another Altima.

Today, I got one. She’s grey, and her name is Sydney Kazu Smith. I name all my vehicles (and my plants) after characters in novel universe. In Brown River Blues, Syd isthe wife of Scott Smith and the daughter of Edwin Montclair and Yumiko Makino. 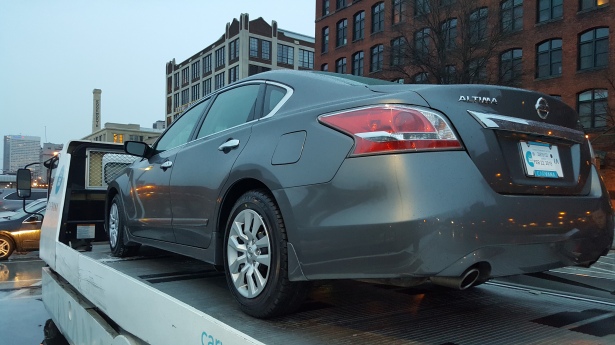 It was close to nightfall, so this is the only photo right now.

Despite it almost being precisely nine years, I weirdly don’t miss Nicole. I guess it’s because I stopped, for lack of better words, I stopped forming a close bond with my cars after Simone sustained terminal mechanical failure in 2006.

The ride and most of the features are virtually the same, despite it being a generation newer than Nicole, so there was no real moment of adjustment. I adjusted the seat and the mirrors, set up my phone and set off on a quick jaunt to Henrico County.

I hope Syd and I have many years together. As I had said with Nicole, I want to keep my Altima even if my fortunes change and I can afford a second car.

I also hope this is the last time I’m in a wreck.

One thought on “starting the year off with a bang”