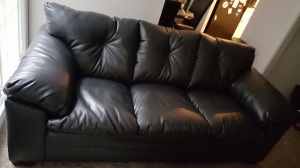 Despite protestations from friends, I got the one that matched our dining room chairs.

I need to get back in the habit of posting more often.

So, I bought my first adult couch. It makes everything seem so weird now. I mean, we’ve had furniture before, but this makes it feel real. A friend donated our dining table and we bought chairs on a whim one day. The TV was a Christmas gift. Replacing the mattress didn’t feel like a milestone. But when the delivery men struggled to put this thing through my oddly shaped foyer, I said to myself, “Holy crap, I’m an adult.”

And then I inadvertently had caffeine that night and planned out all the other furniture I want to get.

It goes without saying that we are not moving out of this apartment anytime soon.

Anyway, we then had a staycation of sorts.

It wasn’t our intent. I need to burn 10 vacation days, and for some reason, we tried to plan out our vacation dates through texts and screwed up a little. I had plans to take my nephew on a college tour that Saturday and Renée thought she had an event to attend on Sunday. Instead, both things were canceled.

We drove to Washington, D.C.

The only thing we did there was let Missy out to pee on the National Mall.

The following day, we went to Winchester because, like me, Renée has a goal of seeing all of the regions of Virginia. I’ve been to 36 of the 38 current ones, and I’ll hit 37 next month. I’ll end this one day with Norton.

I’ll hit Covington because I intend on taking a road trip to Kansas to see my best friends, Mandy and Bill. Bill and Mandy’s husband, Mike, are stationed there, so I’m killing two birds with one stone. I’ve promised to visit both for years and never got around to it.

At the least, one of my fraternity brothers is going with me. I’m hoping for two. It’ll be Voyage XX, my 20th blog-worthy trip. I’ll hit 28 states. I’ll see the entire length of Interstate 64. I’ve been wanting to do that nearly my entire life.

I need to get around to getting my oil changed, brakes checked and making certain I won’t have a mechanical surprise in an exurb of Evansville, Illinois.

Before we get to that, I’m seeing Death Cab for Cutie live tomorrow. I won’t wax poetic about it again.

I am officiating a wedding on Saturday. A friend’s officiant was unable to officiate, so I petitioned the courts one more time so I could do my second. I have about 1½ pages of things to say, because I am a good friend. I wind up editing it every time I look at it because it’s what I do. And because I’m a good friend.

A good friend who is coming to grips that, at some point he became an adult.